How to Troubleshoot Your Garbage Disposal

Ah, the garbage disposal. Such a lifesaver when you need to get rid of yucky gunk that shouldn’t go in the garbage or the compost; a true modern convenience. But you know what’s not convenient? When those pesky disposals get stuck, jammed or just plain stop working altogether. 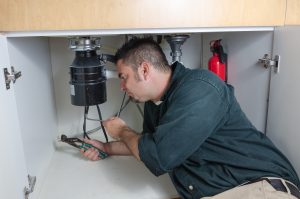 How To Troubleshoot Your Garbage Disposal

First and foremost, make sure your disposal is connected to power. Garbage disposals don’t have a simple plug that jacks into a socket, because that wouldn’t be safe with the moisture levels common underneath sinks. Instead, the wires that carry power to the disposal are usually wrapped in a metal or plastic hose that protects those wires all the way to the power source. If this hose is damaged, you can see exposed wire, or it has become disconnected, you’ve got a power problem and need to call an expert. Usually, though, you just have to check a fuse. Flip the switch or replace a blown fuse and you’re good.

Simple debris can make garbage disposals stop working. Cut power to the disposal by flipping the fuse that controls it to off, then reach in and remove the problem. Common items include citrus peels, raw carrots or meat bones.

Some debris is a lot trickier to get out than others. For instance, dropping a shot glass into the disposal can result in immediate shattering, clogging the space around the blades with glass shards. Then your disposal is not only clogged, but truly jammed. Not only does this stop the blade from spinning, it makes it very difficult to clean the jam safely.

Again, cut power to the disposal before you do anything else. Then put on gloves and reach down to the base of the blade, pulling out any hair, fabric, glass, silverware or other significant debris that might be stopping the blades from spinning. Reach all around inside the disposal to make sure you’ve got everything.

Of course, sometimes there just ain’t anything you can do on your own, and that’s when you should call in an expert. If you haven’t been able to get power working to your disposal, the debris can’t be removed no matter how hard you’ve tried, or the jam won’t go away even though you can’t tell what’s wrong, a plumber is your best bet. They’ll often see the root of the problem right away, and can clean it up without spending a lot of time … or costing a lot of money.

But before you do call in an expert, go ahead and give it a go yourself. In most cases, you’ll be able to clear up the problem on your own. Not only will your kitchen be good to go once more, you’ll get a feeling of satisfaction from mastering your own appliances. Go you!